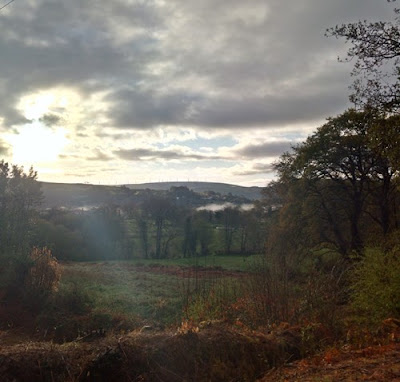 The weather has been, to say the least, changeable.  We had a series of hot sunny days for the last half of March and now it´s raining again. 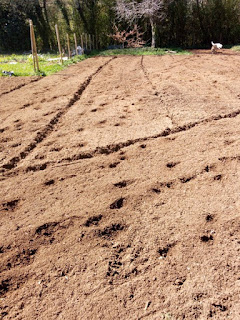 While it was warm and dry, Manolo the tractor guy came by and did a final discing of the new areas.  V and I rented a post hole digger and managed to get the posts up before the rain started again.  Now we need to brace the corners and put on the metal mesh fencing.  I still have to figure out gates.  All that has to be in place before I can start creating raised beds because the dogs will destroy all the work in record time. 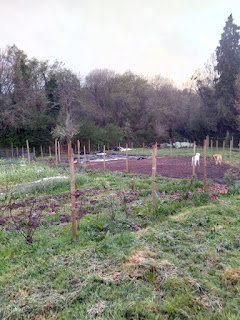 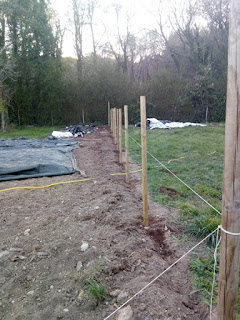 We also had a visit from the well-digger.  As was to be expected, he immediately dismissed the exiting bore hole (with visible, standing water) as too small and essentially useless.  He actually got out a water wand and walked around for a while.  Now, knowing that basically anywhere you pick up a rock around here has a spring underneath, especially at this time of year, I think this was mostly theatre.  And, for the princely sum of 1500 - 2000 €, they could dig us a new well, which would then need electrical service for the pump and a structure.  Keep in mind our city water bill is about 25€ every three months.  The numbers don´t really pencil out.  So if anyone has suggestions as to what we can rig together to make the existing pipe work, while we wait to have roofs and storage tanks appear, let me know. 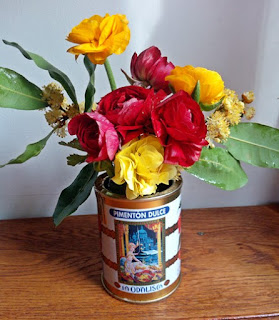 As far as flowers, the anemones are just beautiful and seem quite happy.  I´m definitely planting more next year.  On the other hand, the ranunculus started flowering with the heat wave after suffering from some freeze burn and botrytis.  So they´re a little skimpy on foliage, quite short, and now unhappy to be in the pouring, cold rain.  Next year low tunnels are going to be on the to-do list.