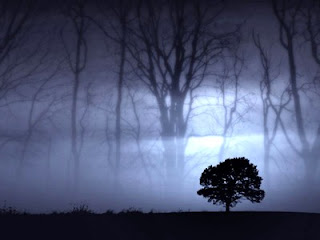 Galicia is a magical place. No really. So in honor of Halloween, my favorite holiday, I thought I´d do a couple of posts dedicated to the supernatural in Galicia.

There´s a famous Galician saying ¨Eu non creo nas meigas, mais habelas, hainas¨ or ¨I don´t believe in witches, but do they exist - they do.¨

What I didn´t realize was that it wasn´t just a belief in witches in general like the faeries, they´re quite specific, and have names.

Galicia is a land both Celtic and magical. From ancient times mystery beats throughout its geography, populated with fantastic creatures arising from the unknown. And so in the villages where the wind whistles and rain lashes the pathways, in shadowed forests, we might happen upon these strange beings at crossroads and feel a chill at their presence. 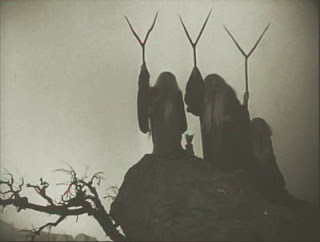 From the inestimable Wikipedia :

* Meigas Chuchón (or sucking) are the most dangerous, they change faces or turn into vampires and insects such as bumblebees. They suck children´s blood and steal their body fat to be used in the preparation of ointments and potions.

* Asumcordas or street witches: Spy on people and watch who goes in and out of houses. (I think these are universal - C.)

* Marimanta: The meiga of the sack, they steal children and make them disappear.

* Feiticeira (Sorceress): They live near rivers and streams, although old, their appearance does not repel. She has such a beautiful voice that her songs hypnotize children who come to the river and cause them to enter it, where they drown.

* Lavandeira: This meiga surprises the traveler who passes a common laundry area 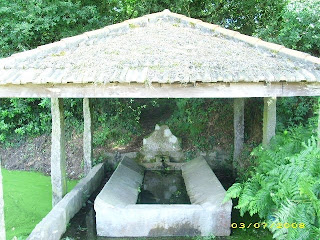 (these are all over Galicia - C), inviting him/her to help wring the wet clothes, stained with still warm blood, said to be from a miscarriage. The traveler must be careful to twist the clothes in the same direction as she does, because otherwise, a disgrace will fall on his/her household.

* Lobismuller (she-wolf): Must be born on Christmas Eve or Good Friday, or be the seventh or ninth in a family of all daughters.

* Vedoira: She is slim and pleasantly polite. She has powers of divination, and is expert in contact with the great beyond to tell if the deceased enjoy eternity in heaven or are still doing penance in Purgatory.

* Voladoira: Fly and do acrobatic stunts in the sky.

* Cartuxeira: witches who are fortune-tellers, who are always right in their predictions.

* Agoreira: These witches age prematurely, but live many years.

* Dama de castro: These witches live under ancient fortresses or underground in crystal castles, they are always dressed in a long white dress with a train and serve the people. Since they already enjoy a good life and fortune, no flattery or favor will induce them to give advice or gifts, on the contrary they tend to appear as people afflicted by a difficult situation, and grant their favors to those of humble status.

* Place a broom turned upside down behind the front door
* Carry a clove of garlic, dried chestnuts. Wear an higa (jet from Compostela is best) around the neck or horns of a vacaloura (stag beetle) 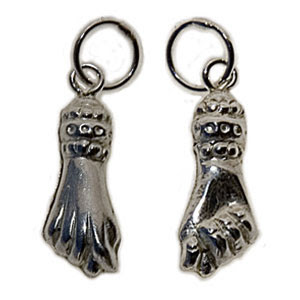 * Keep ¨blessed¨ earth from cemeteries or palm branches blessed on Palm Sunday at home
* Look for claws or wolf´s teeth
* Have pieces of jet, amber and other stones which protect against poisons and charms in forms such as wands, pendants, or brooches.
* Traditionally it is believed that jumping the bonfire at San Juan three times or a multiple of three frightens off the witches. 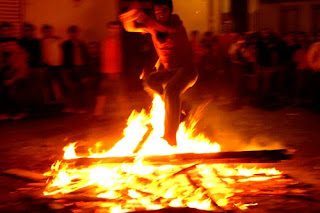 And - at least occasionally, one should perform a 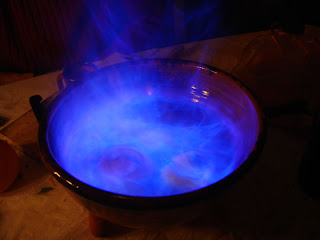 Queimada
Posted by Coco at 1:27 PM